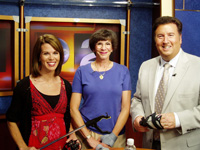 Julie Belkin, founder and president of 3-Point Products (pictured in the center), was interviewed on television about her experience as someone who suffers from arthritis, has treated arthritis patients as an occupational therapist and founded a company that focuses primarily on arthritis-related products.  She has designed a number of arthritis splints for fingers, thumbs and wrists, some of which she wears herself. Among other things, the video shows her discussing two of these splints and a reacher, a type of product Ms. Belkin recommends to every household.

The timing of this television interview was tied to National Arthritis Month (every May).  Megan Pringle, co-anchor on the Baltimore ABC affiliate WMAR-TV's "Good Morning Maryland" program, conducted the interview. The inteview with Julie Belkin is the second half of the 8-minute video clip below.

The first half of the video features Jamie Costello interviewing Dr. Mark Deitch of the Orthomaryland Medical Group. Dr. Deitch's specialty is orthopaedics of the hand. He discusses which joints are most commonly affected by arthritis, different forms of arthritis and various treatment options. Arthritis treatment options include medications, splints & braces, injections and surgery.  The main goals of arthritis treatment, according to Dr. Deitch, are improving function and reducing arthritis pain.

Are you a Patient or Consumer?  Checkout the Oh My Arthritis Blog with helpful information on how to live your best life with arthritis and other health conditions.