With Rheumatoid Arthritis, the immune system mistakenly attacks the body’s own tissues affecting the lining of the joints and causing swelling that may eventually result in bone erosion and joint deformity. The wrist and fingers are involved in approximately 75% of cases.

The early stages of RA include pain, swelling, and stiffness upon waking, while the later stages include progression to significant deformity and instability. A common treatment in the early stages is the use of a resting orthosis at night during sleep.

Nighttime Use of an Orthosis

Many years ago, hand therapists used the orthosis at night simply because it made sense physiologically to the inflammatory process and because our clinical experience told us it was helpful for symptoms. Today, there is some scientific research on this topic.

What does the evidence say?

What should we look for in a night-time hand and wrist orthosis for RA symptoms?

Strapping or padding in the orthosis should comfortably hold the the wrist and digits in neutral.  Finally, as mentioned above, since individuals prefer and are more complaint with the use of soft, padded orthoses, resting pan orthoses should involve soft padding when possible.

The softly padded Comforter Splint used at night during sleep appropriately addresses pain, stiffness, and edema associated with RA. The Comforter Splint supports the wrist and fingers in neutral with adjustable stays that hold the MCP’s in neutral. The thumb CMC is supported but the MP and IP and the IP joints of the fingers are free to allow for nighttime activities. 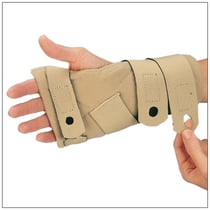 scapholunate ligament injury Tue, Mar 01,2022 @ 02:15 PM Splint Immobilization For Treatment of a Scapholunate Ligament Injury Wrist instability is a common injury treated by many hand therapists. The anatomy of the wrist includes eight carpal bones that, with the combined …
Read More
thumb deformity Fri, Nov 22,2019 @ 02:09 PM Thumb Deformity: Treating Thenar Wasting With a Splint Along with a more common thumb deformity caused by osteoarthritis and rheumatoid arthritis, thumb deformities can also be a result of thenar wasting, …
Read More