Skier’s Thumb: A Hazard of Hitting the Slopes

As skiing enthusiasts hit the slopes this time of the year, the likelihood of the number of thumb injuries increases. An ulnar collateral ligament injury of the thumb called Skier’s Thumb represents 5-10% of all skiing injuries and has been described as the most frequent injury to the upper extremity experienced by skiers.

The Anatomy Behind the Injury

The thumb metacarpal phalangeal (MP) joint is the second joint of the thumb. The ulnar collateral ligament (UCL) is a primary stabilizer for this joint. The UCL originates at the distal portion of the thumb metacarpal bone on the ulnar or index side of the bone and inserts on the inside of the proximal phalanx bone to cross over the MP joint. This ligament provides stability against radially directed/valgus forces or forces pushing on the thumb from the index side. 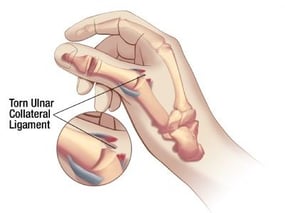 Skier’s thumb refers to an acute injury to the UCL as distinguished from the term Gamekeeper’s thumb which is used to describe an injury to the UCL caused by repetitive stress to the ligament. Though the resulting tearing or rupture of the UCL is similar, it is the mechanism of injury that determines the diagnostic terminology.

Skier’s thumb is said to occur either when a skier falls on an open or abducted thumb or with a fall in which a ski pole is forcibly removed from the hand which causes an acute injury to the UCL of the thumb MP joint. The interruption of the UCL can range from partial tearing of some fibers to complete rupture of the entire ligament. The injury usually presents with swelling and pain at the MP joint. With a complete rupture of the ligament, an individual may even present with a deformity at the MP joint in which the proximal phalanx deviates radially due to the loss of support at the ulnar aspect of the joint.

If an injury to the UCL is suspected, the ligament should be palpated to determine tenderness. Gentle valgus stress (pulling the proximal phalanx of the thumb away from the hand) may also be added to the ligament while supporting the thumb metacarpal. This can be performed with the MP joint in both full extension and approximately 30 degrees of flexion. Pain with palpation or with added stress to the ligament after an acute injury, may suggest skier’s thumb. An increase in motion with valgus testing can also suggest injury to the UCL, but be sure to check the non-involved thumb to determine baseline laxity of the joint.

A complete rupture of the UCL (an injury with greater than 15 degrees of laxity with stress to the joint) is best treated with surgical repair of the ligament by a hand surgeon. A partial tear or sprain of the UCL (where there is pain with stress or palpation without obvious laxity) will likely benefit from immobilization with an orthosis that provides support to the MP joint and prevents any stress to the UCL while the fibers scar. An orthosis can be used for 4-6 weeks and then weaned according to symptoms.

Orthotic treatment for the acute phase starts with a splint that immobilizes the MP joint such as the Fix Comfort Thumb Brace. 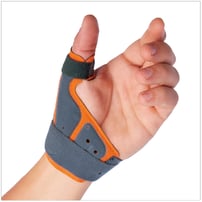 As the acute phase subsides, a protective orthosis such as the ThumSaver MP is recommended to offer the stability needed to return to activities while protecting the UCL ligament fibers for long term healing without limiting function or motion at the thumb unnecessarily. 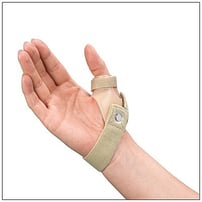