Even though Spring is officially around the corner, many parts of the country are still experiencing winter storms. Snowy and icy conditions often lead to wrist fractures caused by a fall on an outstretched hand (FOOSH). There are a few tricks to the trade to effectively rehab these mishaps.

The 3pp Wrist Wrap NP  and the 3pp Wrist POP are examples of supports that can help individuals recover from wrist pain related to strains and sprains, post-operative, or post casting after a FOOSH.

Addressing range of motion after a distal radius fracture

Once the cast or external fixators are removed, the work of restoring finger, wrist and forearm motion starts in earnest. Composite finger flexion, wrist extension, and supination are motions important to functional use of the hand, and these motions are commonly limited after a wrist fracture.

The importance of therapy working to restore forearm supination after a wrist fracture is best appreciated by the person who has lost or restricted supination.

A distal radius fracture can have significant functional ramifications and a well organized and communicated therapy program is essential to an optimal outcome. 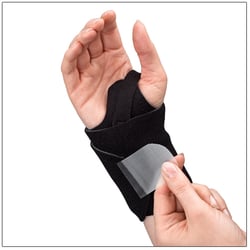 Blog References: For more info on this topic, click to see the references for this blog post.